You can use Workbot for Slack to send commands to your apps to do things, such as show details for a product or account, show list of opportunities or invoices or tickets, or to create or update existing objects. How does this happen and how can you customize it for your company?

Note : Customization of Workbot needs the full version of Workato platform, learn more about the pricing and features available in Workato here

How does a Bot Work

A Workbot's underlying gears and bolts that makes it tick is call a Workato Recipe. A Workato Recipes are well structured for user's integrations between applcations, and usually runs in the background that automate certain business tasks. However, with Workato Recipe powering Workbot in your Slack, that means you can create any kind of integration logics, simple and complex, and have them on demand on your Slack itself. For a Workato Recipe to get the Workbot extensions, there is a connector call Workbot on Workato that assist on this.

Behind every command is a bot that is waiting to serve you. Each bot is listening for commands that are

Once the bot is activated, it follows a set of actions - such as search for a product, lookup the price book for it, and then it posts the response to the Slack channel it came from.. lets take a quick look.

These are all the fields available in a Post Command reply action. We will get into the details of each field means in the later part of the section. 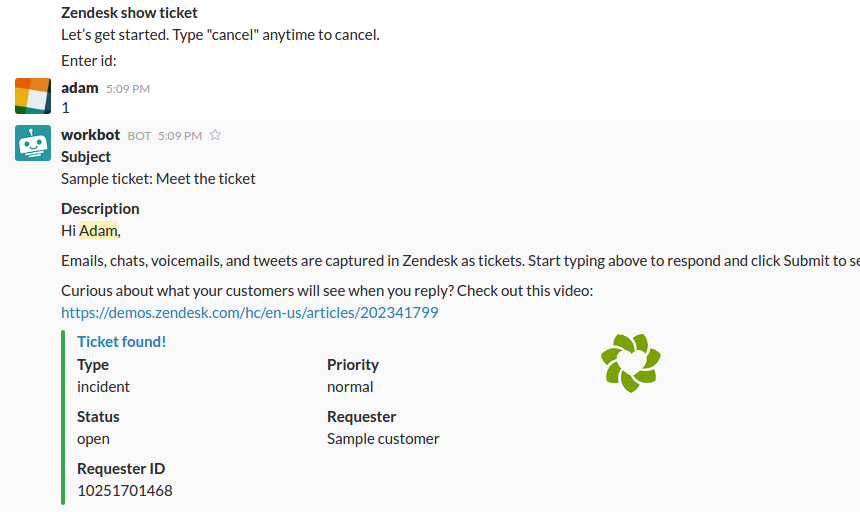 And the End result of a Post Notification Action in Slack :

You can customize the existing commands or notifications by just changing the script for the bot. Or you could create new commands or notifications. Let's take a look. Here we are on the My Recipes page. To create a new one, we copy an existing recipe (you could create it from scratch as well, but why?), and change the recipe. For the notification recipe, the cloned recipe was changed to ignore orders less than 5000. For the Product show recipe, the command was changed to get item.

Creating your own Workbot functions require a minimum required understanding of the Workato platform. To get started, click here.

Multi-App Bots
Creating a completely new command with all your own vocabulary is as easy, and while you are at it, with Workato Recipes you can have your Workbot command to combine data from multiple apps.Here's an example. As a Project manager you may be introduced to new users that work in the same project, and you may need create new them in QuickBooks as new customers. You would then need an automation that create a customer in QuickBooks from a Salesforce Account.
With Workato recipe, I can now create my own Workbot command that does the sync on demand.  You can specify the command, the App itself, and the values needed to perform the action. In this case, the application will be QBO, my customer as cust and the action as copyfromsf. The work to be done:
With the below configuration, calling command copyfromsf cust name:UnitedSF on Slack will now perform the above integration, and creates a new Account in Salesforce only when necessary.
Let's watch how the bot looks and how the command works from Slack.

Have a question for us about Workbot? Post a question here and our community experts will take a look at it!