This article will explain how to set up a HTTP Webhook Trigger for Marketo.

1) Set up the trigger on Workato

In Workato, create a new recipe > Application: HTTP > Trigger: New event via webhook. Next, fill up the Event name. Once Event name is filled up, you will notice that the target URL in the lightbox will be updated with your Event name.

Leave the webhook type as "PUT/POST with JSON payload", empty payload as "No", and you can leave the Webhook payload example blank for now. 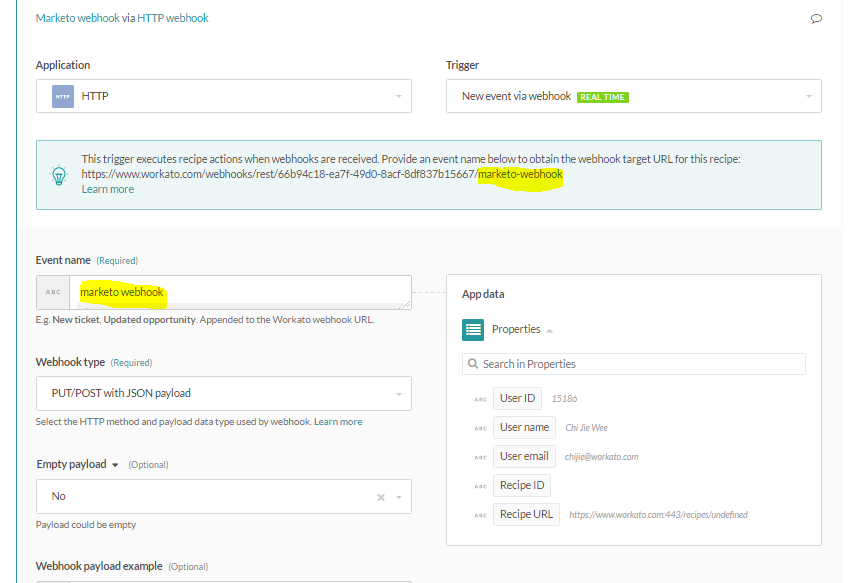 2) Configure the webhook in Marketo

I. In Marketo, go to Admin > Integration > Webhooks > New Webhook 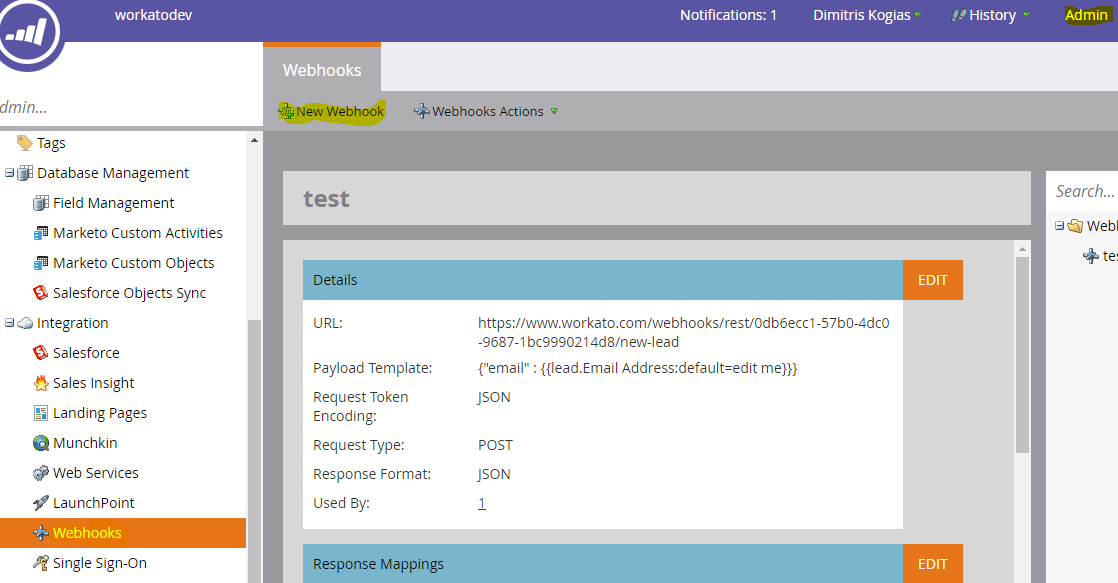 II. GIve your webhook a name, then copy and paste the endpoint URL from Workato into the URL in the Marketo New Webhook popup. 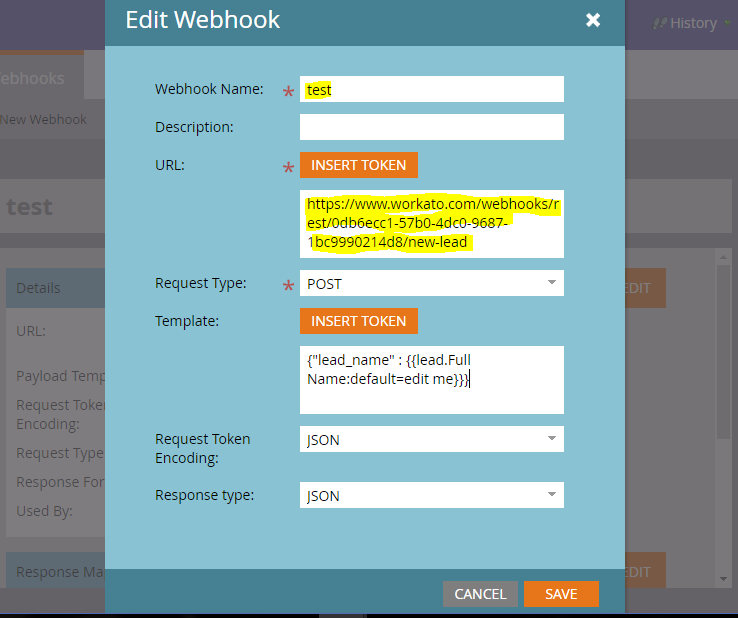 In the template, insert the relevant tokens/information that you want to send over the webhook. 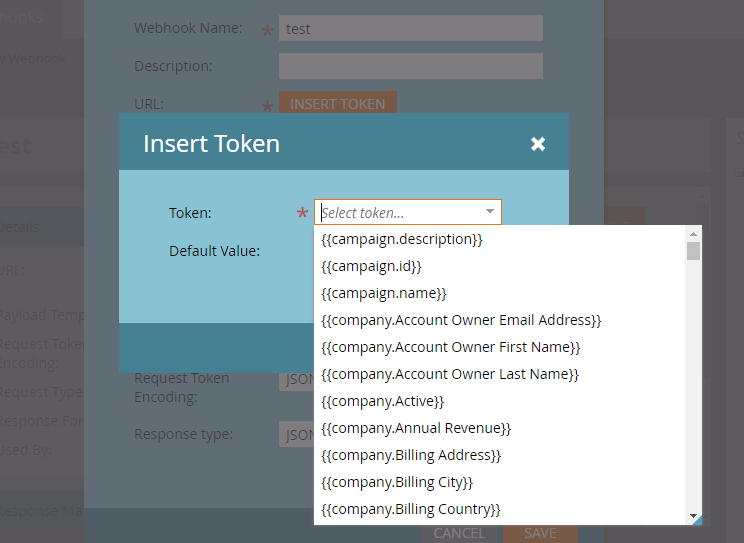 Do note that after selecting the tokens you want, you still need to format the template into JSON format like so:

*You need to add opening and closing braces {}, and give each token a field name. Additionally, the field names and field values need to be encapsulated by quotation marks. For instance, I used "lead_name" as the field name for the lead name token. 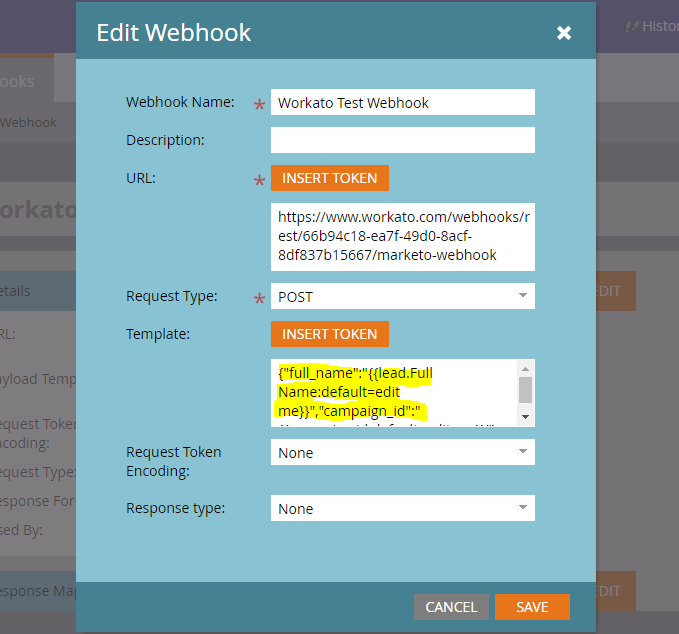 The Request Type should be "POST", the Request Token Encoding is "JSON", and the Response type is "JSON".

3) Create a new "Smart Campaign" under the "Marketing Activities" tab. Set the folder you want the campaign to be under, and give it a name. 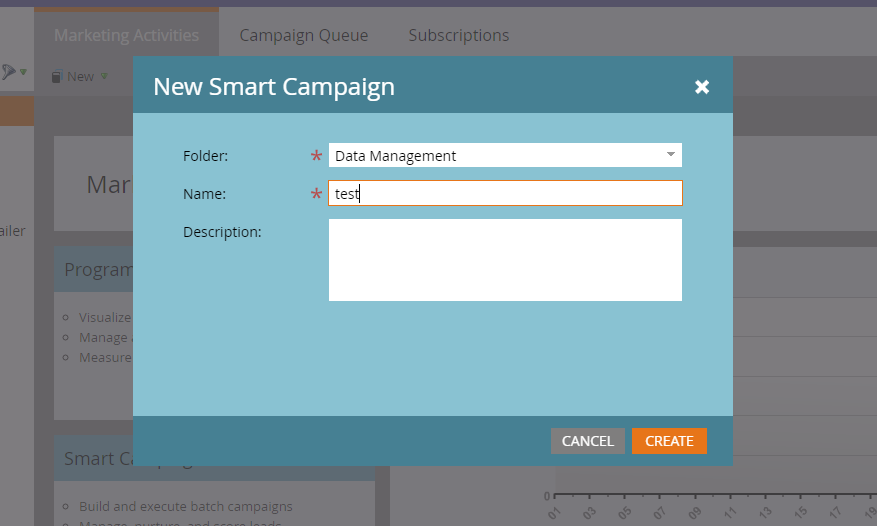 I. In your Smart Campaign, configure the Smart List which will determine when the Webhook is sent to Workato. In the example below, the webhook will be sent when a lead is created. 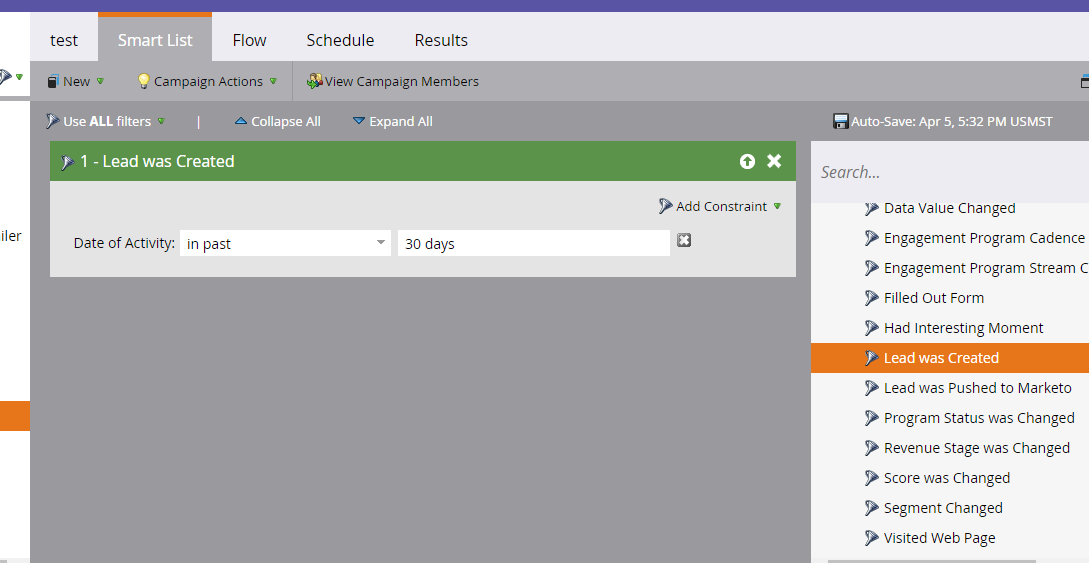 II. Next, configure the Flow. Drag and drop "Call Webhook" into the flow, and select which webhook you want to be called. This means that every time the condition in the Smart List is met, the webhook that you set will be called. 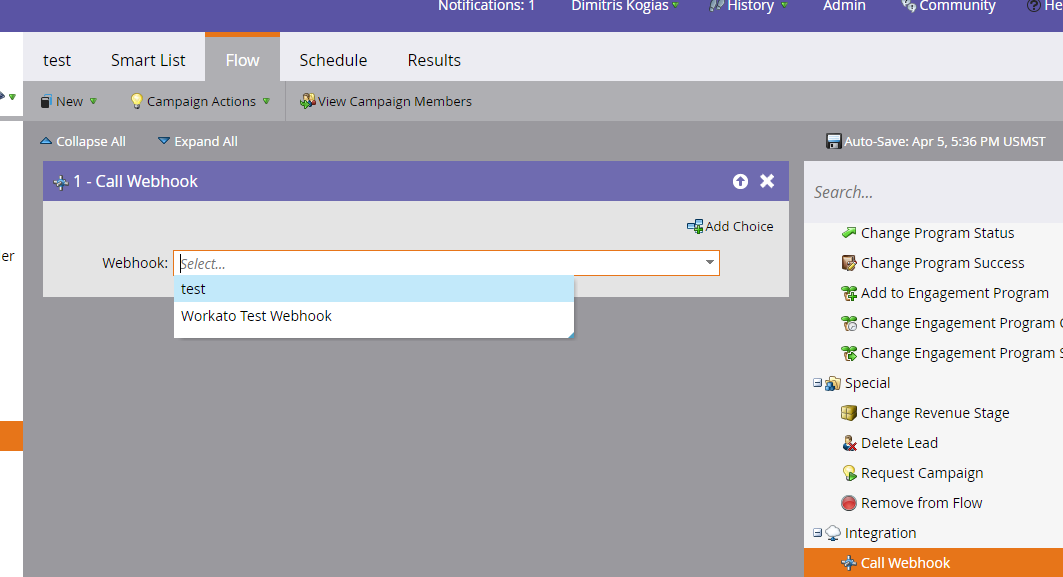 III. Configure the schedule accordingly. You can choose the run each lead through the campaign flow once, everytime, or once every period which you can customize. 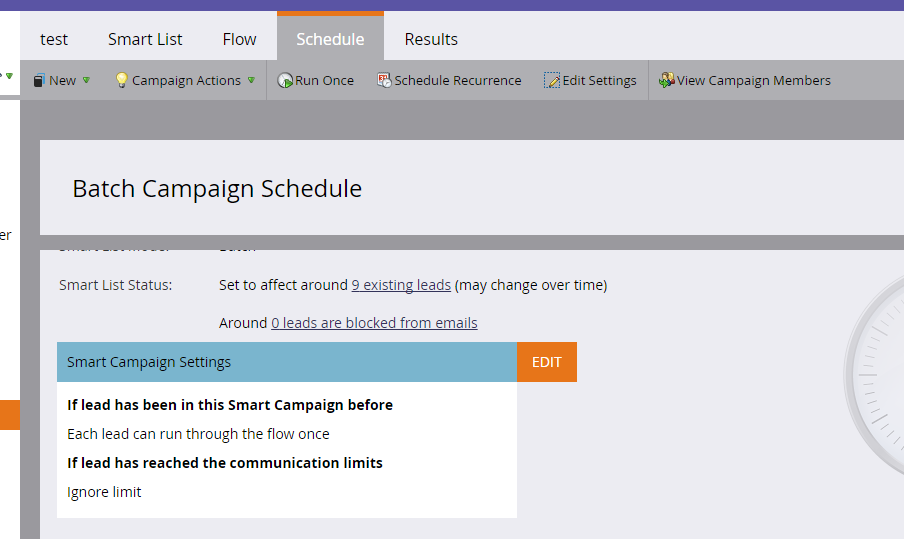 4. Start the Workato recipe, then create a lead on Marketo. This should trigger the webhook and the recipe should be triggered. Looking at the recipe's job output, you will see that Marketo's webhook sent the information that we configured in the webhook's template.

5. To access this data as data pills in your recipe configuration, you need to configure the Webhook payload example in the recipe trigger. 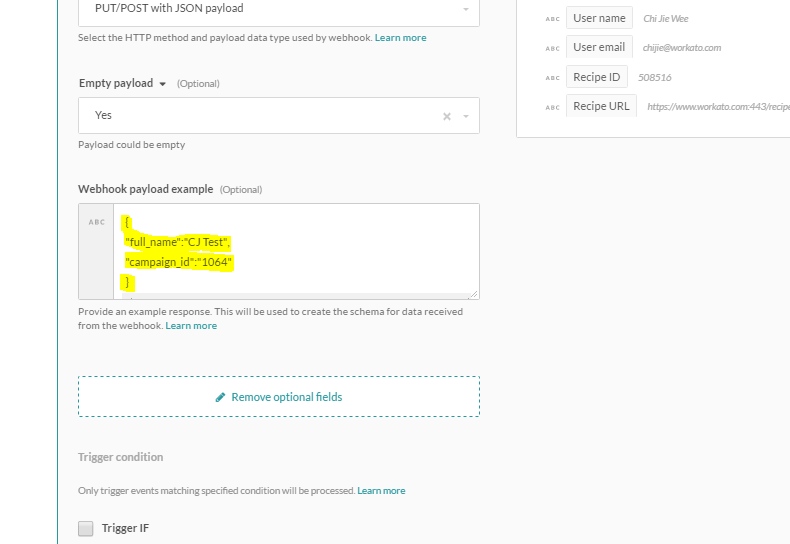 The Webhook payload example will be reflected in your trigger output as data pills which you can use for mapping in your recipe. 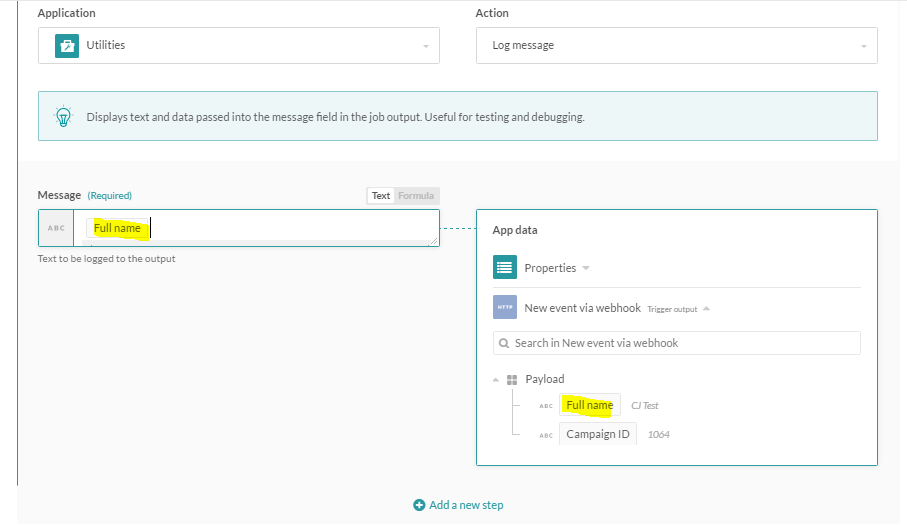 Your webhook is now set up, and if you require more fields to be sent over from Marketo, simply adjust the Marketo webhook template as well as the Recipe Webhook payload example accordingly.